The focus in this document is put on vertical flight efficiency during the climb and descent phases of flights rather than during the cruising phase.

During climb and descent, pilots are often faced with intermediate level-offs (Figure 1).

These level segments increase fuel burn since they generally take place at suboptimal altitudes. During descent the impact on fuel efficiency is generally higher because additional thrust has to be applied to fly level, while the lowest thrust setting could be used when a complete continuous descent would be available and flown by the pilot.

Hence, several studies and the reference material related to this topic (Larsson 2011; Performance Review Commission 2008; Canarslanlar et al. 2014; Airbus 2004) suggest that the benefit pool regarding fuel efficiency is larger for descents than for climbs.

Continuous climb operations (CCO) and continuous descent operations (CDO) are beneficial for the environment, in terms of fuel burn, the associated emissions and noise (Figure 2).

The methodology presented here (see grey box) is very similar for the climb and descent phase so that the results for both phases are directly comparable.

Additionally to the 200NM radius, a vertical limit is used based on the altitude put in the flight plan at 200NM from the airport. This altitude is used to be able to highlight inefficiencies which are introduced on a tactical basis. Obviously, these inefficiencies are not known to the airlines before they take off so the amount of fuel on board might not be the optimal amount.

The practical use of the methodology is demonstrated in the following case study showing all flights from/to a specific European airport, based on a radar data sample for July 2015.

The following assumptions were made for the analysis:

Table 1 shows the numerical results of the analysis.

It is clear that much less level flight is detected during climb than during descent. This observation is the same for all major European airports.

As an example, the vertical trajectories during descent are plotted in blue in Figure 3 while the level segments are highlighted in red. It is clear that there are some vertical glitches present in the data but these will rather result in an underestimation of the amount of level flight. 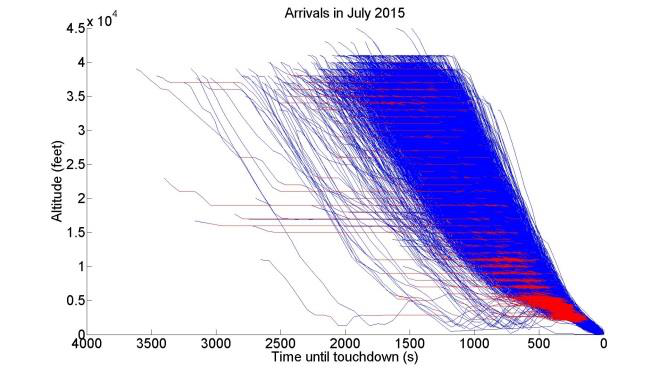 It’s also interesting to evaluate the positions of level segments. Level segments of several flights around the same position suggest the presence of specific restrictions. Figure 4 shows the lateral view of the descent trajectories. Besides the level segments close to the airport, due to the vectoring and ILS procedures towards the runway, there is some level flight at higher altitudes as well. These level segments are most likely a result of constraints in handover procedures between neighbouring ANSPs, airspace restrictions or operational procedures which signals scope for future improvements. 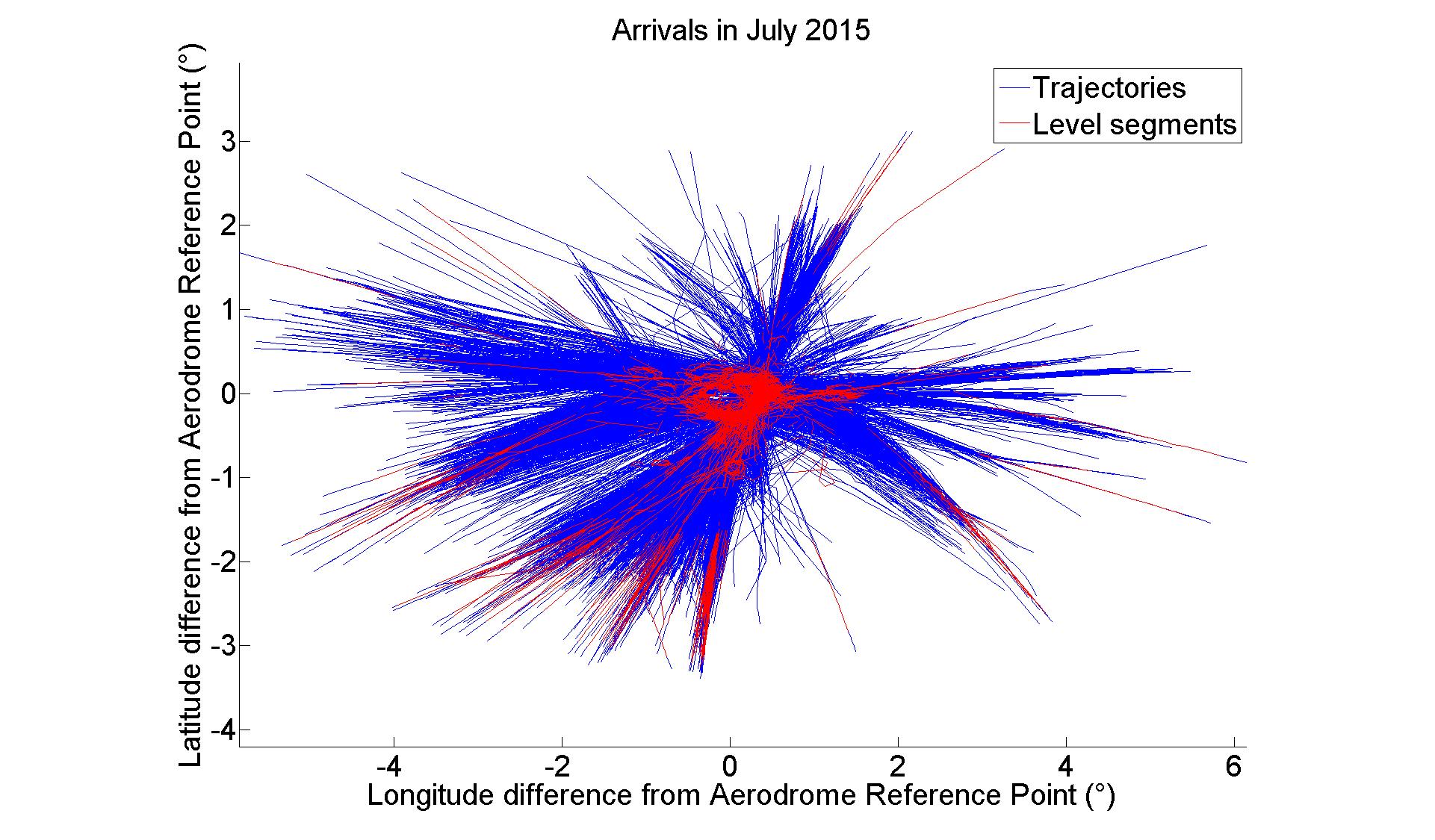 This study is available as a PRU Leaflet, see (Sam Peeters 2016) in the References section below.

A paper has been submitted to the 2016 ICNS Conference, see (S. Peeters et al. 2016) in the References section below.