This technical note describes the methodology used in order to calculate the unimpeded ASMA time.

The computation of the unimpeded ASMA time is based on the statistical analysis of flights in non congested conditions.

In order to determine whether a flight is unimpeded or not, its congestion level is computed as the number of other aircraft ahead in the arrival queue, i.e. the number of aircraft that landed between the time the flight under consideration crossed the ASMA border and its own landing.

The graphic here below illustrates the evolution of the ASMA transit time as a function of the congestion level. In this picture, the range between the first quartile (bottom bar of each rectangle), third quartile (top bar) and the median (medium line) is depicted for each level of congestion. 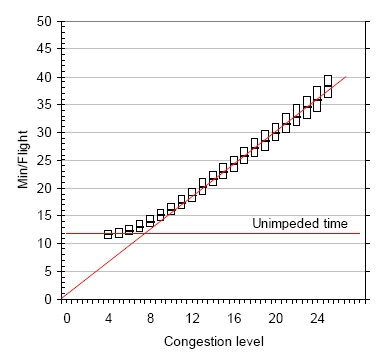 Night flights may be subject to special procedures that are not representative of daytime operations. In addition, when the airport is subject of a curfew, the first flights in the morning might be delayed in order to land after the curfew end time. In order to avoid that both night flights and ‘first post-curfew’ flights bias the traffic sample, flights between 6:30 and 22:00 only are used for the calculation of unimpeded ASMA time.

A different unimpeded ASMA time is determined for each combination of:

Although unimpeded ASMA time is relatively static in time, regular checks are made to ensure that it remains representative of the operations for the airport under consideration. In case a change of unimpeded time is detected, the causes of that change (new procedure implementation, change of TMA design) are investigated. When required, new unimpeded times are calculated. However, because this method is based on statistical analysis of the actual ASMA transit time, a period of several months after the change is required before new robust unimpeded times can be established.

Determination of the unimpeded ASMA time

In this methodology, it is assumed that

The following input data are required in order to calculate the actual ASMA transit time:

Because aircraft have different approach performances, aircraft are classified, based on their ICAO designator, into:

In most of the cases helicopters do not interfere with other traffic. It was however experienced, in some cases, that helicoper traffic had to follow the published procedures and be sequenced with other aircraft. In order not to consider a flight that could be delayed by preceding helicopter traffic as unimpeded, helicopter movements are counted in the congestion index. Helicopter movements are however not counted in the computation of the throughput used for the saturation level.

Determination of the ASMA entry sectors

Figure 2: Determination on the ASMA sectors.

The following checks are performed to test the validity of the results: 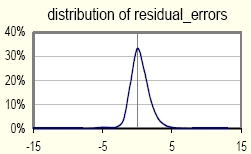 Additional ASMA times for unimpeded flights should remain close to zero. A change in the unimpeded time might indicate a change in operational procedures or a re-design of the TMA during the reference period under consideration. In such a case, new unimpeded ASMA times will be calculated in order to consider the impact of these changes.

Every month the following checks are carried out for each airport:

If one of these conditions is not met, reasons for the changes are investigated and new unimpeded ASMA times are calculated if required.