This document describes the conceptual, informational, and implementation independent model of the Horizontal Flight Efficiency Indicators – KEP, KEA and KES.

The indicator is used as part of the performance monitoring and reporting under:

Purpose of the document

The purpose of this document is to provide a description of the horizontal flight efficiency indicator and its two versions used in the Performance Scheme Regulation – KEP and KEA. It addresses different audiences with different needs, and for that reason the description is provided at increasing level of detail.

Section Summary of the performance indicator information provides a high level description of the indicator, introduces the concept of achieved distance and provides the rationale for its use as the base for the computation of the additional distance (i.e., the balance of the need to evaluate local performance with the need to take into consideration its impact on the measurement of network performance). It includes a final subsection with some special cases and frequently asked questions which should help clarify how it is calculated.

The calculation of this performance indicator is performed according to the Horizontal Flight Efficiency Data Flow standard for data collection and processing, under the responsibility of the operations unit in the QoS department of the PRU, which is compliant with IR317/2019. The Horizontal Flight Efficiency Data Flow associated processes and procedures are documented as part of the PRU Quality Management System.

These key performance indicators are also defined in the Implementing Regulation (317/2019), Annex I:

Summary of the performance indicator information

Horizontal flight efficiency (HFE) is very simply defined at its highest level: the comparison between the length of a trajectory and the shortest distance between its endpoints. 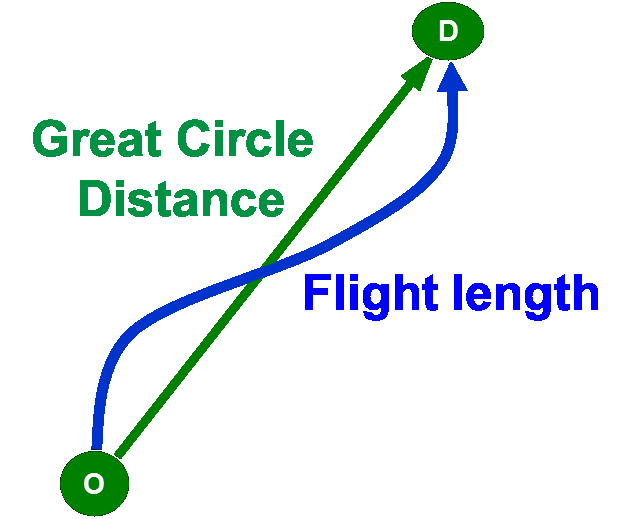 For an entire flight we want to calculate the additional distance flown between take-off and landing with respect to the most direct route between the two airports (Great Circle Distance). The need of a more detailed definition arises because we need to take into consideration different variations from the situation described above, such as the possibility that one (if not both) of the airports does not belong to the area on which we would like to measure the efficiency and the need to define the measurement on a portion of the flight (e.g., en route) instead than for the whole trajectory.

In addition, there is a specific need which stems from the SES requirements to measure local performance (FAB level) while at the same time keeping the network perspective.

This is true when the values in the table correspond to the flown distance and the achieved distance (defined in the following section), which allows to apportion the great circle distance for the entire trajectory to any of its parts, e.g., between the entry and exit into a FAB.

The achieved distance is the average of two quantities. The first quantity considers how closer to destination the trajectory takes from its entry point into an area to its exit point from the area (left part of Figure 3). This can be calculated as the difference between 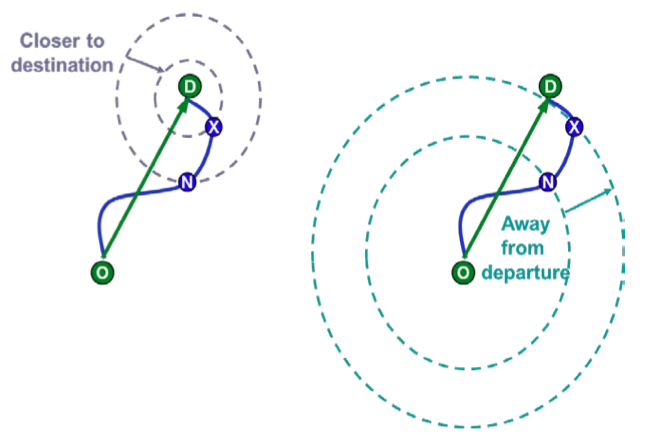 Figure 3: The two Quantities Averaged in the Achieved Distance.

In a similar way the second quantity considers how further from origin the trajectory takes from its entry point into an area to its exit point from the area (right part of the picture). The roles of the entry point \(N\) and the exit point \(X\) are reversed and the quantity is calculated as the difference between

Considering two specific points along the trajectory (for example its entry point \(N\) and its exit point \(X\) into/from an area), together with the origin \(O\) and the destination \(D\), the formula to compute the achieved distance is:

where all the distances between points are calculated as great circle distances.

It can be verified that taking a sequence of points between \(O\) and \(D\), e.g., a sequence of entry/exit points in different areas, the sum of the achieved distances (including the one from the origin to the first point and the one from the last point to the destination) is equal to the great circle distance between the origin and the destination.

It might seem natural to consider the comparison of the flown distance in a local area with the great circle distance between the entry and exit point of the same area. Such a measurement would not take into consideration the network perspective, as can be seen in the (extreme, for illustration purposes) example of the Figure 4. 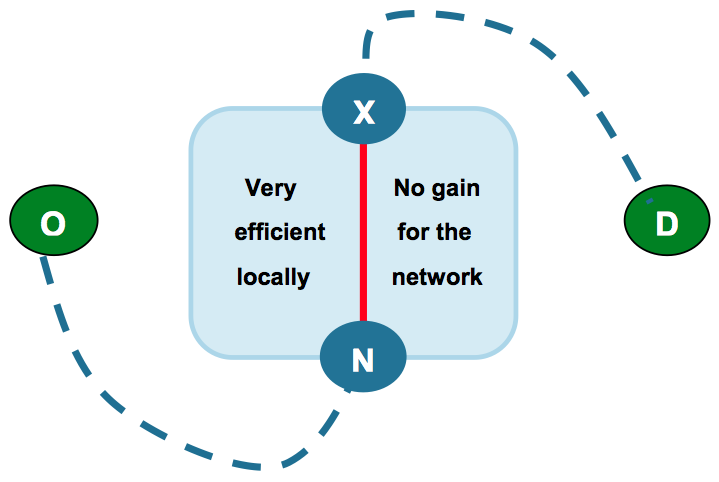 Figure 4: A case of perfect local efficiency with no network contribution.

The red trajectory between the entry point N and the exit point X is perfectly straight and would be considered perfectly efficient from the local point of view, while from the network perspective there has been no improvement as the aircraft would be no closer to destination (and no further from the origin).

Decomposition of inefficiency in local and interface components

In the example of the previous section, the extension is zero (the red line corresponds to the direct between entry and exit) and the inefficiency is equal to the interface value. The exact interface value would depend on the position of the entry and exit points with respect to the origin and destination of the trajectory. If both \(N\) and \(X\) were equidistant from the origin and destination (i.e., \(\overline{OX} = \overline{XD}\) and \(\overline{ON} = \overline{ND}\)) the achieved distance would be zero and the interface value would be equal to the direct distance between entry and exit. From the network point of view, since there is “no improvement” in the goal of getting from origin to destination, any distance flown between the two points should be considered as additional distance.

With the achieved distance, the value used for the FAB measurement will be the same for both flights because inside the FAB the trajectory is identical (in this specific case both the extension and the interface will be zero, as the trajectory is direct between entry and exit and the entry and exit points are aligned with the origin and destination).

It has been proposed to compute the value of the local efficiency as the average, taken over all flights traversing the local area, of the entire trajectories. In the example above, while the two trajectories are identical within the FAB, their contribution would be different because the inefficiency of trajectory \(1\) outside the FAB will be taken into account (as a matter of fact, the calculation would not isolate the local performance). As a result, the inefficiency of the FAB will also be greater than zero.

Summary of the different quantities

Table 2 below provides a summary of the different quantities involved in the computation of the additional distance (and therefore the inefficiency) for a flight. As can be seen in the last column, while the lengths of the trajectory, the achieved distances and the additional distances are additive, the same is not true for the lengths of direct course, the extensions and the interfaces. In particular, it should be noted that it is the sum of the achieved distances which corresponds to the great circle distance for the flight, not the sum of the length of direct courses.

Aggregation of results to produce the indicator

Once the origin and destination of a flight have been set, via the use of achieved distances it is possible to compute in a consistent way the value of the indicator between any two points of the trajectory of a flight. It is important to note that the flight efficiency is an average measurement where the average is taken over distances and not over flights. This is particularly useful when dealing with three specific aspects:

When looking at a specific flight, it is always possible to decompose the flight in different portions, of which some will not be taken into consideration for the calculation of the indicator (as an example, the first part of the trajectory will never be included because it will either be inside the 40 nautical miles or outside of the reference area). Every portion can be attributed to a specific measured area (e.g., a State, a FAB, the SES area).

Flight efficiency compares the length of a trajectory with the great circle distance. The indicator is expressed as a ratio of the length of trajectories and achieved distances:

In words, the en route horizontal flight efficiency indicator for an area j is taken by summing the values over all flights f and all en route portions p in the area (a flight might re-enter the area).

At a technical level, it is worth noting again that the indicator is an average per distance unit and not per flight.

There is no difference in the methodology used to calculate the value of the two indicators. The KEP indicator is the horizontal flight efficiency calculated using the last filed flight plans to describe the trajectories, while KEA uses the trajectories generated via radar data. KES is based on the shortest constrained route available for flight planning.

In order to smooth out the influence of unusual events, in reporting annual values the ten best days and the ten worst days (for each measured area) will be excluded from the computation.