This document provides a technical description on the methodology used in the analysis of the vertical profile of the aircraft’s trajectory during the en-route phase of flight. The objective of the methodology is to measure and observe vertical flight efficiency without highlighting specific reasons for the observed behaviour. More detailed case studies are needed to find out reasons for particular observations.

Since the aircraft type has a significant influence on the nominal cruising altitude, the analysis is done using specific aircraft types with similar performance (e.g. only jet aircraft, turboprop aircraft …) Currently only Airbus and Boeing aircraft are considered since they account for the biggest portion of scheduled commercial flights.

To account for statistical uncertainty, the lowest and highest 10 percent of the flights (when sorted according to their maximum altitudes) are excluded.

The analysis is done in 4 major steps. First, the necessary data are extracted from the data source. Then the reference distributions are calculated such that they can be used for all the airport pairs under investigation. For each considered airport pair, the maximum altitudes in the flight plan are processed in order to be compared with the reference. In the last step the different metrics are calculated. The process is visualised in Figure 1.

Figure 1: Different steps of the analysis.

The following paragraphs explain these steps in further detail.

Definition of the reference distribution

The reference is based on the assumption that flights between airport pairs with similar GCDs, performed with a similar aircraft type, would file for similar maximum altitudes. The differentiating factor between the two sets of flights can be the presence of RAD constraints, scenarios, airline policy, mistakes in the flight planning system, etc., and if the distribution of the maximum altitudes of flights on the chosen airport pair doesn’t follow the reference distribution, this could be an indication of inefficiency.

Distribution of the maximum altitudes

Figure 2 shows the histograms of the maximum filed altitudes both for the reference flights and the flights on the chosen airport pair. The numbers on the right of the bars indicate the number of flights while the length of the bar indicates the percentage of flights. E.g. the large blue bar at FL350 represents 260 flights, being 76.2% of the total number of flights on the chosen airport pair. The sum of the percentages corresponding to the lengths of the bars is 100% both for the blue and for the red bars. As can be seen from the values of the number of flights, there are a lot more flights in the reference distribution which makes it a stable reference. 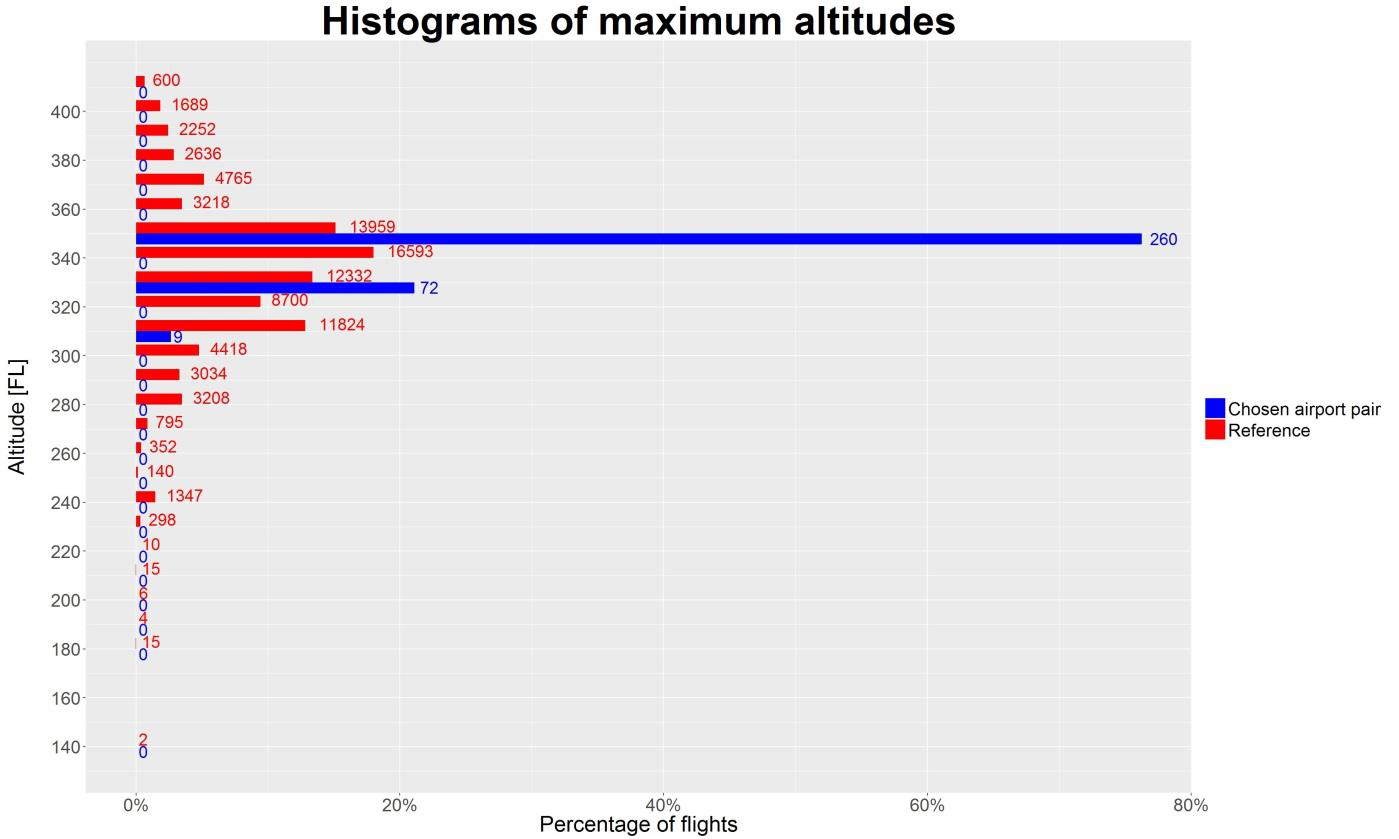 The data in Figure 2 above can be represented differently, using percentiles as shown in Figure 3. To obtain this, the percentages from Figure 2 are simply put successively. E.g. the percentages of the chosen airport pair (blue bars: 2.6% at FL310, 21.1% at FL330 and 76.2% at FL350) are plotted at their respective altitudes to get the blue line in Figure 3. The same is done for the reference.

The example represents an airport pair on which, in general, flights are filing higher than the reference. There are however some percentiles where reference flights are filing higher than the flights on the considered airport pair. Only this part is used in the calculation of vertical flight inefficiency (VFI) in order to flag only the inefficiencies. The red shaded area in Figure 3 indicates the VFI. The dark grey areas on the left and right highlight the percentiles that are excluded to account for statistical uncertainty as mentioned before. 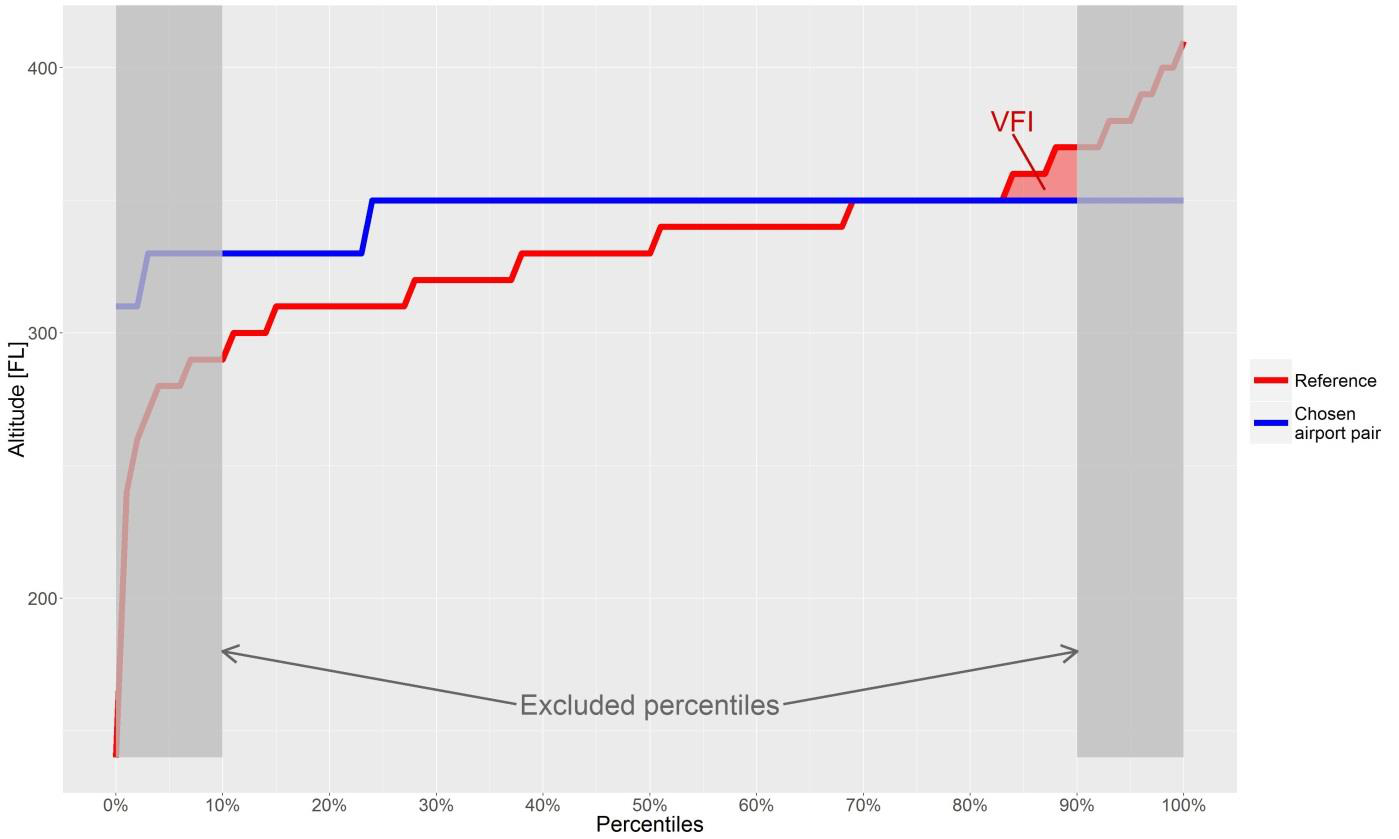 Calculation of the metrics

Table 2 summarises the formulas used for the calculation of the VFI metrics.