This page provides a technical description of the preliminary methodology used to calculate the Composite Risk Index (CRI).

The CRI represents a cumulative risk value aggregating all reported, assessed and severity classified safety-related incidents to form an index. This measure of risk exposure is based on probability and severity that considers the human perception of equivalent risk.

Note that CRI can be calculated for any given entity, provider or the State.

As a proxy of safety risk within certain airspace, State, or any Entity, the concept of exposure to risk, based on reported / historical safety information was proposed.

In order to calculate the composite risk, each historical, reported occurrence had to have assigned severity (using Risk Assessment Tool methodology) and probability (calculated from historical safety data).

Modelling can be performed using any source of safety occurrences data, as long as the input satisfies the minimum data requirements.

The CRI calculations are based on the following information:

A detailed data description can be found at the end of this page.

The process is visualised in Figure 2.

Occurrences with no severity classification

All severity unclassified/not assessed events (Severity Category D) are distributed into groups A to E, based on historical distribution (determined using the all available safety data).

The probability of occurrence being assigned to a specific severity category is calculated using historical data, separately for each State/Entity in order to simulate/take into consideration the local conditions.

Figure 3 shows how unassessed occurences (severity D) are distributed into other severity groups. 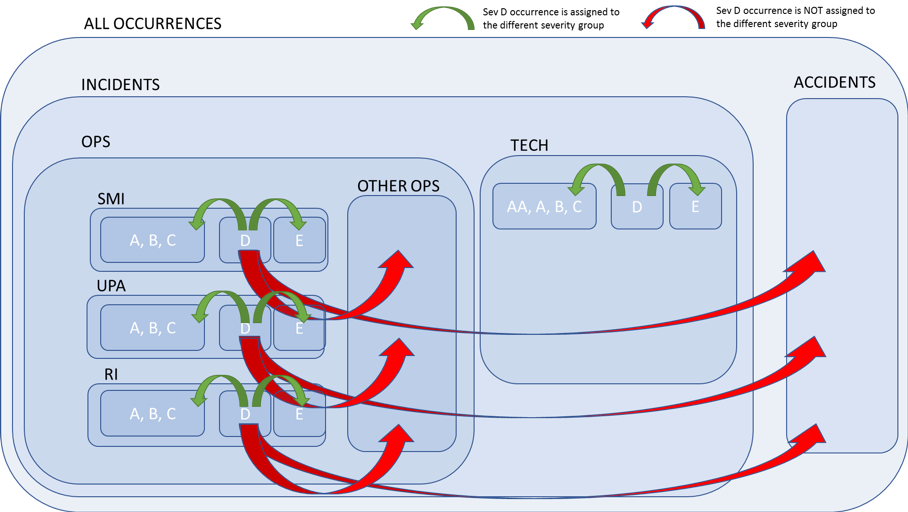 The formula how the total numbers of specific type of occurrence were determined using the distribution based on probability of unclassified occurrences is presented below.

The probability of each type of occurrence is calculated using the simple principle:

Introduction of Weights to express the severity of the event allows their description in non-monetary terms which have a meaningful and understandable explanation in human perception.

Each weight value for specific Severity category is determined by using the optimisation technique, with the aim to select a combination of weights that will not disturb the computation of the CRI from year to year if significant changes in reporting are introduced. In other words, the optimisation will find which combination of weights result in the lowest standard deviation of CRI values between the years for each Entity.

Due to a large number of variables involved and the enormous number of combinations possible, the optimisation and selection of the Weights combination is done in stages:

In addition, each type of weight selection has predefined weight ranges, to allow for an incremental Severity classification order, based on human perception of risk (from accident to Severity C incident, i.e. from high risk to low risk). In other words, each range has an expectation value associated with it. See further details in the methodology report (Commission 2019)

To allow the applicability of the CRI to airspaces with different traffic levels, the CRI is normalised by flight hours for each Entity. The CRInorm is calculated based on the following formula:

For CRI calculation, each historical, reported occurrence besides classification, has to have assigned severity and probability.

Modelling of Weights can be performed using any source of safety occurrences data, as long as the input satisfies the minimum data requirements as in the table below. Note, that safety data, should include occurrence severity, reported and calculated using severity classification of the Risk Assessment Methodology.

The classification scheme for safety occurrences in ATM specifies six severity categories for ATM related occurrences impacting the safe operations of the aircraft (as per ESARR2).

The RAT classification scheme specifies five qualitative frequency categories (repeatability). However, these values are not commonly reported through the AST. Each State/Entity in principle should develop their own quantitative boundaries, which should consider national traffic volumes and specific operating conditions of the national ATM system.

Therefore, the occurrence probability is calculated using historical data from all available years separately for each Entity in order to simulate/take into consideration the local conditions.

For further information on the preliminary methodology please refer also to the report explaining the development of the methodology (Commission 2019).

For more detailed information on the updated methodology, please see the PRC Technical Note explaining the further development of the methodology (Commission 2020). The technical note explains several statistical methods used to model index weights, overall computation, logic behind it, its use and limitations, and lastly areas of further improvement and expansion.

Please feel free to use sample data provided to get familiar with the methodology.

User guide how to set up the environment can be found at ‘README.pdf’ file within repository.